'A reader has reported seeing the ‘Fenland Big Cat’ around the Friday Bridge area last week.
John Johnson, of Victoria Road, Wisbech, says he spotted an animal crossing a field while walking his dog on Thursday at 5pm.'

'Mr Johnson said: “I was walking my dog on the old canal site in Elm when I saw an animal crossing the fields at high speed from Friday Bridge to the A1101.

“It was about as tall as a Labrador but twice as long and mainly black.

“It had a brown cat shaped head, so not a muntjac deer or fox. Did anybody else see it?”
There have been several sightings of a big cat creature across Fenland over the years.'
Posted by Neil A at 07:31 No comments:

Apologies for lack of updates; some 'big cat' sightings received are now posted on the Facebook page BIG CATS IN KENT. The first report comes from the outskirts of the Ashdown Forest from late July and concerns a motorist who whilst diving braked hard to avoid a large black cat that ran across the road in front of him. He described the animal as slightly smaller than an Alsatian dog and carrying a rabbit in its mouth. In mid August 2015 a large black cat was observed near Battle by a man walking his daughter at 8:00 am. The animal strolled out of the bushes some fifty yards away; causing the dog to turn rigid and stare at the cat which then stopped in its tracks, turned round and vanished into the bushes from whence it came.
Posted by Neil A at 13:51 No comments:

An older report of two 'big black cats' in Sussex.

"Thanks to Bob Skinner for this:

"About thirty years ago I decided to go down to a private estate on the Ashdown Forest that I had permission to fish & shoot. It was deep winter and snow lay everywhere and the lakes were frozen over completely but I parked at the top of the drive and made my way down to see if I could bag something for the pot. It was a really still day and the snow clung to all the twigs and branches making everything look amazing and the silence was almost stifling, with everything muffled by the deep snow which continued to fall heavily. Mooching around on the ice of the bottom lake and just enjoying being able to look at the forest from a completely different perspective, my ears detected a sound and I looked up the track to see a small herd of roe deer moving quickly through the trees heading towards the path which they crossed without pausing. Realising that something had obviously spooked them, and that no-one else should have been there I looked back towards where that had come through the trees assuming that I would be able to spot whoever was around. What I saw next will stay with me forever as I spotted two large black cats bounding through the snow towards the route the deer had taken. On reaching the path I had a good view of them as they paused before loping across the path and back into the woods where the deer had disappeared.

I got off the ice and made my way up the path to where I had seen them cross and, sure enough, there were large cat spoors amongst the deer slots in the snow at the edge of the path but as I stood there the falling snow was rapidly covering all evidence up. The light was fading rapidly as I made my way back to the car but I vividly remember my laboured breathing condensing in front of me and thinking that I must be getting unfit. It was only when I was sitting back in my vehicle I realised that it wasn't the slope that had made my heart pound but it was what I had just witnessed. Me spooked by something in the English countryside, I'd never, ever thought that would happen!

As a postscript, I continued to visit this private estate for several years and spent many happy days and nights out there alone and whilst I regularly saw loads of deer I never again saw a shred of evidence that big cats were, or had ever been, at large there."
Posted by Neil A at 08:47 No comments:

A black leopard sighting has been reported to me this evening (20/1/2015) from near Seaford, in Sussex. A motorist was driving home from Seaford towards Cuckmere River when according to the witness, "a very big black cat casually stepped out of the bushes along the opposing side of the road and walked out right in front of me - it must have been 20ft away I could and still can't quite believe it! As I got to maybe 18-15 ft away it upped its pace and jumped up the bank to left of the road and disappeared across the pathway."

Over the past five or so years there has been a rise in sightings from the Seaford area; although there have been numerous sightings reported from the area over the last fifty or so years. Statistics based on our files suggest a small population of melanistic leopards which have used the railway lines, rivers and notably Seaford Golf Course for navigation. With Friston Forest close by there is plenty of foliage for a large cat or two to disappear into and with Castle Hill Nature Reserve and the forest flanking the area of sightings; it's no real shock to find such a concentrated area of reports. we'd also be interested to find out whether Drusillas Zoo have ever had anyone report a large cat in the vicinity.
Large cats are often reported around local zoo parks, attracted by smells and possibly cats housed at the parks although as  far as we're aware Drusillas only keeps servals. Even so, one huge patch of woodland and forest provides a perfect green belt for an elusive cat if it wanted to makes it way through to Ditchcling, Portslade and Hove golf course where a few years ago now a professional golfer reported to us that he'd seen a large cat one afternoon whilst he was practising. If one follows the greenbelt - taking in Steyning, Patching, Arundel, Midhurst and cat on the hunt could easily end up in Hampshire within a few weeks. The term 'looking for a needle in a haystack' certainly applies here...
Posted by Neil A at 17:32 No comments:

From the archives: The Gardener who was attacked by a lynx!

In 2001 a gardener contacted Lewes police in Sussex claiming he'd been attacked by a cat which was "three times bigger than a domestic cat". He had disturbed the animal whilst clearing a thicket when the confrontation occurred; resulting in the man apparently grabbing the cat around the neck before it made off. Whether the incident actually happened we'll never really know, but here's the article in three parts for your perusal: 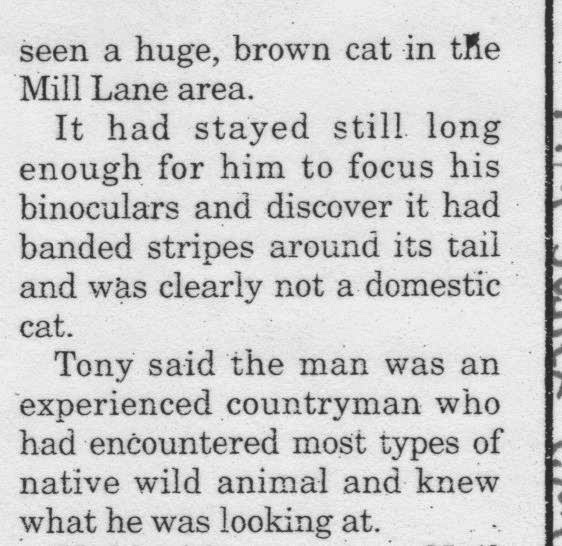 How did a dead lion end up in a Sussex freezer?

Find out more by reading HERE
Posted by Neil A at 09:41 No comments:

'TRAIN passenger saw what he believes was a “puma” type cat.
Kevin Tully was travelling with his wife Amanda Zoe, 49, when he spotted what he believed to be a big cat near Southease railway station, between Newhaven and Lewes. Mr Tully, of Beacon Road, Seaford, said: “There was a big cat quite close to the railway line, nestling in next to a hedge.
“It was circling in the way cats tend to do before they settle down somewhere.
“What was really weird was that it was in a field of sheep. “The hairs on my neck stood up.
I did try to point it out to my wife but we had already gone past where it was.”
Mr Tully, aged 50, who is a technology teacher, told of the sighting after dog walker Dianne Lonnon came across a “spotty brown coloured cat” in nearby Cantercrow Hill in Denton, near Newhaven. Mrs Lonnon, who has been on safari twice, said she thought the cat looked like a leopard but that details were difficult to remember as she was so scared.
Her sighting was noted by a Sussex Police wildlife officer at the time.
Mr Tully believes he did not see a leopard. He said: “It didn’t look like a leopard, it was sleeker and smaller.
“It looked like a dirty puma to me. It was the size of a puma but it had markings on.
“My wife told me it must have been a big dog, but its movements were definitely those of a cat. I saw it for at least five seconds.”
Mr Tully used to live near Paignton Zoo in Devon.
He added: “I used to go and see the pumas there and funnily enough my brother used to look after one in the days that wild animals could be kept as pets.
“I didn’t report it because I thought people would reckon I was mad.”
Dozens of big cat sightings have been made to Sussex Police over the past decade, including a suspected sighting of a lion.'
Posted by Neil A at 02:04 No comments: 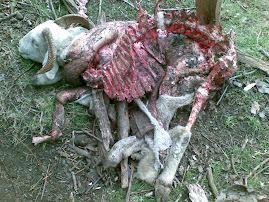 BUY THE BOOK AT AMAZON